There’s a technique in acting called “giving focus”, where you confer the attention of the audience to another on stage through your body language. You can also “take focus” away from the other actors on stage by drawing it to yourself.

Likewise in society, prestige is taken away and given back to people all the time. In fact, it’s a nice little hustle to take away someone’s status and then sell it back to them.

A while back I found myself in need of a job. My brother-in-law, at the time, ran a fancy bar in Atlanta, so I ended up working there on the weekends.

My assigned task at the bar was to stand at the front entrance and do crowd control. They told me to keep the riff-raff out, so to speak, and make sure the crowd was the “right mix.” The right mix was a combination of two groups: Group One was made up of the young and beautiful doing their best to appear like they had money and Group Two, the not-so-young, who in fact did have money. Group One attracted Group Two who paid for the four-figure bar tabs that kept the place in business.

Before I started, the bouncer at the door would just stand in the front and block it, deciding on a case-by-case basis who to let in. I put a little rope across the entrance so that there was one level of separation between me and the people wanting to get in. The rope added to my authority and made it seem less personal when I declined entrance to someone. I developed a method of eyeing people up and down, ceremoniously detaching the rope to let them in before hooking it back and examining the next person.

Starting about 11:30 pm is when the crowds would start to really build up. The bigger the crowd, the pickier I’d become. As the crowd grew outside the rope, people would offer me money to get in. On a good night and if I played my cards right I could make more in 30 minutes than the bar paid me for the whole weekend. The trick was to act like I was doing them a favor by taking their money.

It soon occured to me that while I was there, I was a merchant in status. I took it away with how I treated people on one side of my little rope and then sold it back to them when I unhooked it and let them in. An artificial process no doubt, but not an ineffective one.

The show at the door had some unspoken rules. For example, if you tipped me well once, then if I recognized you on another night, I made a big deal about ushering you right in past the waiting crowd. Also, once you were “inside” you could come out and pull one of your friends to the front of the line. So the people who bought their way in sometimes would come out and look the crowd over to see if there was anybody they wanted to pull out of obscurity. Sometimes it was yes, sometimes no.

Some of the biggest tips I’d get were from people when they left, just to thank me for letting them past the rope. Occasionally, as the night wore on, women I’d admitted earlier would make their way to back the front and ask me to let them help out. I’d let them unhook the rope or check Ids. I remember one particular instance;  one lady, fortyish, well put together and dripping affluence, whispered conspiratorially in my ear “I wish I had your job. I’d be so much meaner than you are.” 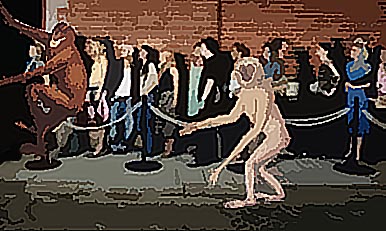 My name is Donovan Craig. This is my blog.

View all of Donovan's posts.